The clinical quality indicators for general and emergency surgery are:

This is the clinical quality indicator for the mortality rate within 90 days of surgery for colorectal cancer. Lower is better.

Benchmark figures lag a year behind, in order for the collation and analysis of national figures in the National Bowel Cancer Audit, so the most recent report (December 2014) adds 90-day mortality data from patients treated between April 2012 and March 2013.

Information on 90-day mortality outcomes after surgery for colorectal cancer in 2010-13 is now published on NHS Choices website and includes data from all hospitals in England (see graph). 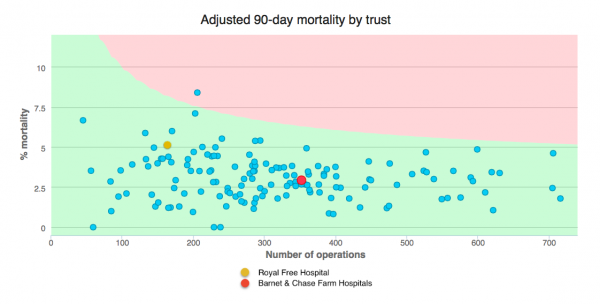 Post-operative mortality is one indicator of the effectiveness of multi-disciplinary surgical care for colorectal cancer. It is monitored nationally in the National Bowel Cancer Audit as understanding the variation in mortality rates can spread best practice.

We aim to have a lower risk-adjusted 90-day post-operative mortality than the national average (currently 4.6%).

Our 90-day mortality outcomes from surgery for colorectal cancer are similar to other English hospitals. Our units have also achieved the ACGBI guideline target of <7%.

This is the clinical quality indicator for the EQ-5D and EQ-VAS patient-reported measures of hernia repair outcomes.

The EQ-5D measures a patient's own assesssment of their general health based on 5 key criteria:

The EQ-VAS records a patient's current state of health on a visual analogue scale. Patients complete questionnaires before and after surgery, and a risk-adjusted health gain is calculated.

Patient-reported outcomes measures (PROMs) on groin hernias have been collected since April 2009, and are regarded as experimental data. As hernias may have little impact on the five key criteria examined, pre-operative levels of general health are usually already high. It is unclear to what extent the operation alone contributes to the post-operative score.

PROMs collect data on the effectiveness of care delivered to NHS patients as perceived by patients themselves.

We aim for our results to be above the national average.

37.5% of our patients reported an improvement in their EQ-5D index (a combination of five key criteria concerning general health) following groin hernia repair in 2012-13. This was below the national figure of 50.2%, and a reduction compared to our previous score of 44% in 2011-12.