Find out how we are doing in cardiology using the links below. More information on how we choose our indicators can be found by clicking on the link on the right hand side.

The clinical quality indicator for the proportion of patients with a first heart attack who were discharged on all five medicines for secondary prevention.

There is strong evidence that anti-platelet agents (clopidogrel), ACE inhibitors, statins and beta-blockers reduce mortality and the risk of recurrent ischaemic events following a heart attack.

Following a first heart attack, NICE recommends that patients should be discharged on the following five drugs for secondary prevention:

The National Service Framework on coronary heart disease stated a target of 80% for the prescription of asprin, statins and beta-blockers following myocardial infarction. No national target is set for ACE inhibitors and clopidogrel.

We aim to achieve a local target of more than 95%, benchmarking ourselves against other acute trusts in England as published in the Myocardial Ischaemia National Audit Project (MINAP) annual report.

98% of our patients received all secondary prevention medications for which they were eligible following a heart attack. This was above the England score of 88.3% (2014 figure) and a reduction compared to our previous score of 99.1%.

This clinical quality indicator measures the proportion of patients with suspected heart failure who are investigated by transthoracic echocardiography to detect poorly-functioning heart muscle, valvular heart disease and other important structural abnormalitites.

Heart failure is common, costly to the NHS and has a high mortality (40% of patients die within the first year of diagnosis). Early confirmation of the diagnosis provides opportunity to commence timely, life-saving treatments.

99.5% of our patients with suspected heart failure were assessed with an echocardiogram in 2012/13. This was above the national average of 91%.

For patients suffering a heart attack, time to reperfusion treatment is key to improving survival and minimising damage to the heart muscle.

The time from a patient first calling for help to the first inflation of the angioplasty balloon during primary angioplasty, is termed the 'call to balloon' time (CTB time). The National Infarct Angioplasty Project suggest that a CTB time of less than 150min should be achievable in 75% of patients being treated by primary angioplasty.

The time taken from the patient first arriving at the interventional centre to first ballloon inflation is termed the 'door to balloon' time (DTB time). The National Infarct Angioplasty Project suggest that a DTB time of less than 90min should be achievable in 75% of patients being treated by primary angioplasty.

Our objectives are to achieve a CTBT of less than 150min and DTBT of less than 90min in over 95% of patients.  Our performance will be benchmarked against our London and national peers. 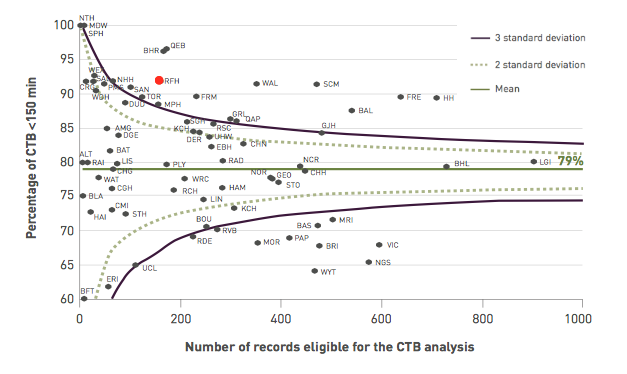 We achieved a call-to-balloon time of less than 150 minutes in 92% of patients who presented direct to the Royal Free London heart attack centre or via inter-hospital transfer (having presented to one of the hospitals in our cardiac network).

Our performance from Jan-Dec 2013 continues to be significantly better than the national average of 79% (see 'graph'), although we have not yet achieved our own objective of 95%.

We achieved a door-to-balloon time of less than 90 minutes in 97% of patients who presented direct to the Royal Free London heart attack centre or via inter-hospital transfer (after presenting to one of the hospitals in our cardiac network). Transfer time is not included in the 90 minutes.

We therefore met our objective and out-performed most UK hospitals on the DTB measure.