Immunology experts from the UK and Europe visited the Royal Free Hospital in June for the symposium for the UCL Institute of Immunity and Transplantation (IIT). 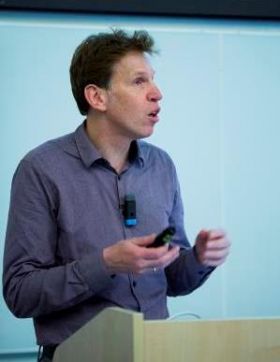 On 2 June academics gathered to hear lectures from a range of speakers, including Dr Ton Schumacher, from the Netherlands Cancer Institute, who gave the inaugural Pears lecture, entitled “What T cells see on human cancer”.

Professor Gillian Griffiths, the director of the Cambridge Institute for Medical Research, and Dr Gitta Stockinger from the Francis Crick Institute also spoke at the event.

Among the IIT researchers speaking about their work, were Dr Emma Morris, who talked about gene therapy for the treatment blood cancer, and Professor Sir Mark Pepys, who spoke about new biological therapies for amyloidosis.

Professor Hans Stauss, the director of the IIT, said: “There is a buzz in the field of immunotherapy. Scientists, industry and patients are working together to translate immunology research into new therapies. Leaders in the field have come together to present the latest insights into how immune system works and how we can use this information to develop better therapies for patients.”

The Pears lecture is named in honour of Pears Foundation, the charity that has donated £5 million to the construction of the new home for the IIT. Once complete, The Pears Building will house the expanded IIT. Work on the new building, which will be next to the Royal Free Hospital, is expected to begin later this year.