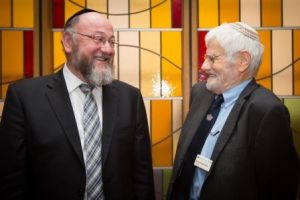 Bernd, 85, has been a chaplain at the hospital for 20 years. He retired on Thursday 27 October.

Rabbi Mirvis said: “Bernd, you have been a star. Just being with one person that is enough to be able to justify all this enterprise. You have done this for countless people. The Jewish community is immensely proud of your achievements. – it’s my privilege to be associated with you.”

Bernd said that his 20 years as a chaplain has given him a new insight in to life.

“I’ve learned how to speak to people, deal with people, and to do something for them,” said Bernd.

“Lots of people think that being chaplain is just visiting people – but over the years I began to see it as something quite different – it’s dealing with people, their joys, their sorrows,  their problems and their troubles.  It’s not just about patients of your own faith and it’s not just about visiting patients, it’s about doing so much more.”

Bernd was born in Germany in 1931. In order to escape Nazi persecution Bernd’s parents sent him to England when he was eight years old. He travelled here as one of the Kindertransport children. Sadly, he never saw his parents again.

Bernd, who is a grandfather of six, will continue with work with the charity the Jews’ Temporary shelter as a trustee and the UK Kindertransport committee and he speaks to schools and adults on his experiences.