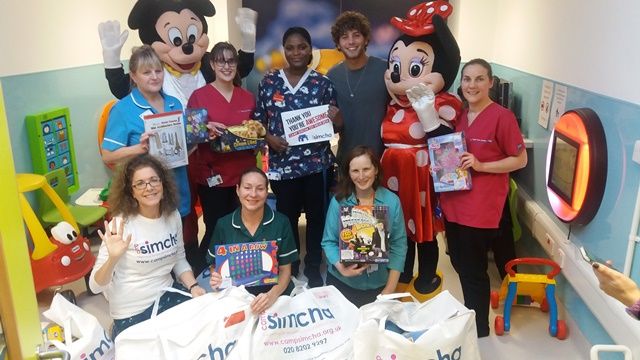 The 23-year-old model, who appeared on ITV’s Love Island back in the summer, arrived at the front entrance on an electric scooter and was soon bringing a bit of sunshine to children and families on the wards.

Eyal was handing out gifts on behalf of Camp Simcha, a Jewish charity which organises toy drops to many London hospitals at this time of year. He was joined by Mickey and Minnie Mouse who were also keen to meet the children.

Eyal revealed he is shortly heading off to the Phillipines with the charity, World Vision, to find out about the work they are doing to help communities rebuild their lives after Typhoon Mangkhut struck in September.

Eyal said: “I’m delighted to be here at the Royal Free Hospital. I don’t think of myself as anything but if I can make someone feel a bit better and if someone wants to meet me and I can cheer them up then that’s what counts.”

First up for a chat was 10-year-old Zac Robinson, who is facing on-going hospital visits. He was pleased to get a break from his school-work to meet Eyal, who had picked out a toy drone for him.

Zac said: “I actually don’t mind doing maths but my favourite subject is history. Thank you for coming to see me – I’m having to spend quite a bit of time in hospital at the moment so this is fun.”

Eyal confessed: “This is exactly the sort of toy that appeals to me – I’m really a big kid still at heart!”

Jodie Littlechild, mum to Millie, said her daughter, who is turning one tomorrow, had been brought in because she had trapped her finger in the wheel of a bicycle and almost sliced it off.

She said: “Millie cried for a couple of minutes when it happened but then started laughing. She is such a happy little girl but I was so worried when she was having her surgery. She’s absolutely fine now thank goodness and the finger has been successfully reattached. It’s great to see Eyal. I think everyone was watching Love Island this year!” 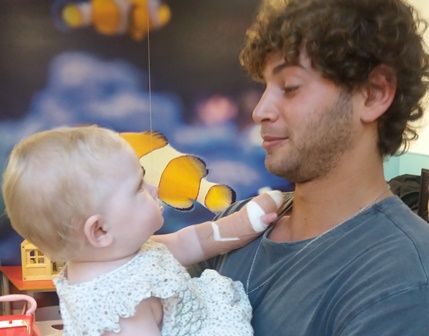 Eyal also met 10-year-old Maayan Quintana who was awaiting facial surgery and little Yisroel Stein who had been diagnosed with pneumonia but was recovering well. Yisroel turned out to be scared of Mickey Mouse but soon became one of Eyal’s youngest fans thanks to a squeaky frog soft toy! Eleven-year-old Carlo Fabien Martinez-Joret and Eyal soon bonded over Lego and 15-month-old Diane Bernard couldn’t contain her giggles when she met Mickey, Minne and Eyal.

Eyal told staff Christmas this year would be spent relaxing at his grandma’s and admitted there was still space under the mistletoe for a plus one as he is currently single.