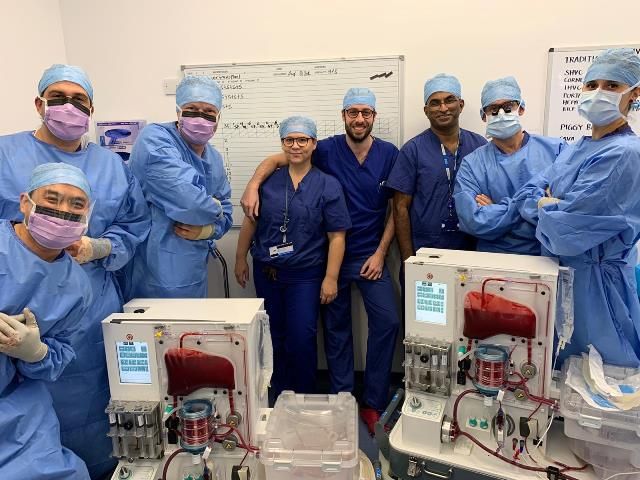 A life-saving device and a liver were ‘blue-lighted’ by ambulance in a 90-minute dash from Birmingham to London resulting in two successful transplants.

The double transplant was thanks to the quick-thinking of the Royal Free Hospital’s (RFH) transplant team but also the generosity of another NHS trust.

The RFH was notified that a liver from a deceased patient had become available and just two and a half hours later a second potential liver was also identified as being available for transplant, for another of the trust’s patients also waiting for a liver.

At the RFH the (NHS funded) Organox machine has been used regularly for facilitating liver transplants since April 2019. This machine mimics the conditions in the body. It keeps the liver alive and active, rather than being held in a cold storage box, and allows doctors to better assess whether it is suitable for transplantation. OrganOx also allows the liver to be kept for an additional 24 hours outside the human body but only one liver can be attached to it at any one time.

So Professor Joerg-Matthias Pollok, the clinical lead for the RFH’s liver transplant service and a consultant liver transplant surgeon, came up with an ingenious solution. He spoke to Mr Thamara Perera, a surgeon based at the University Hospitals Birmingham NHS Foundation Trust, who agreed to loan their OrganOx machine to the RFH.

Both liver and machine were ‘blue lighted’ by ambulance  arriving safely within 90 minutes and the liver was then placed on the loaned machine.

As well as being able to test the liver after it had been put on the machine by consultant surgeon Mr Satheesh Iype, the use of the second device also meant that Professor Pollok was also able to rest for a few hours before conducting the second surgery with a fresh anaesthetic team.

Professor Pollok, who assisted his consultant surgeon colleague Mr David Nasralla in the first transplant and carried out the second transplant, said: “I’d like to thank our multi-disciplinary team that worked so hard to enable these two transplants to take place and for the support of our NHS colleagues in Birmingham.

“These transplants really show the power of partnerships and the collaborative spirit of the NHS. If we hadn’t been able to borrow the OrganOx we would have been unable to accept the second liver which would have meant our patient missing out.

“I would also like to pay tribute to the generosity of organ donors and their families, without whom none of this would have been possible.”

The first liver transplant recipient, Mahfuzul Alam, 32, who works in marketing and lives in east London, has had a condition since birth which means his body doesn’t produce enough red blood cells and he needs blood transfusions every month. As a result of a poorly screened transfusion in the 1990s, he contracted hepatitis C which over time causes damage to the liver.

Mahfuzul said:  “A routine MRI picked up that cancer lesions had developed and I had them removed but at the beginning of this year they found more and it was decided that although my liver was currently functioning, I needed a transplant before the cancer developed further.”

Mahufuzul was put on the transplant waiting list in May and had to wait a few months for a suitable liver.

He said: “The first possible liver I was alerted to proved not to be viable but the second one did and I’m so thankful for the OrganOx machine. It was explained to me really well by the co-ordinators and the surgeons how it worked and it set my mind at rest because they were able to see the liver functioning successfully before they transplanted it into me. I’ve had a lot of surgery over the last few years and been in most of the major hospitals in London so I’m hoping my new liver works well and I can enjoy life, hopefully with fewer hospital visits.”

The second liver recipient is also recovering well at home.

Since the arrival of the OrganOx machine, the RFH has been able to increase the number of liver transplants it carries out. Livers that would previously have been rejected by surgeons for transplant are now accepted because it is possible to test their function prior to transplant.  However there is still a shortage of livers available for transplant.