An image produced by a researcher at the Royal Free Hospital has been named one of the winners in a competition which celebrates beauty and art in Parkinson’s research. 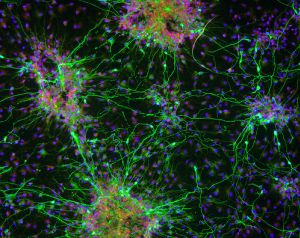 The image of brain cells grown in a dish produced by Dr Shi-Yu Yang, was named one of the top ten images in the 2015 Picturing Parkinson’s competition, which is run by the charity Parkinson’s UK.

The competition is held in memory of scientist Dr Jonathan Stevens, who died of Parkinson’s at the age of 34.

The pictures produced by Dr Yang show what brain cells grown in a dish look like under the microscope. These cells have been developed from stem cells in the skin. The different colours and shapes represent important features of these cells that are also present in the brains of people with Parkinson’s.

Dr Yang is currently carrying out research at the Royal Free Hospital and the UCL Institute of Neurology. The research is aimed at using gene mutations to develop new treatments for Parkinson’s.

The project, supported by Parkinson’s UK and the Medical Research Council, and led by Professor Anthony Schapira, head of the department of clinical neurosciences at the Royal Free London, has this month attracted additional funding of €1.45 million (more than £1,200,000) from the EU. Teams from Germany, Italy and Canada will also be assisting.

Image: The picture of the brain cells produced by Dr Yang