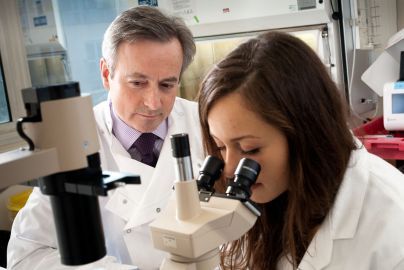 Patients at the Royal Free Hospital have taken part in a study which could potentially lead to a treatment which could slow down the progression of Parkinson’s disease.

Published in The Journal of the American Medical Association (JAMA) Neurology the study, led by Professor Anthony Schapira (pictured), head of the department of clinical neurosciences at the UCL Institute of Neurology and professor of neurology at the Royal Free and National Hospital for neurology and Neurosurgery, has shown ambroxol can effectively cross the blood-brain barrier and increase levels of glucocerebrosidase (GCase) in the brain cells of people with Parkinson’s.

Ambroxol is a commonly used medication which eases coughing, promotes the clearance of mucus and is used for the treatment of diseases of the respiratory system. It also has anti-inflammatory properties.

Preclinical experiments suggested that ambroxol may help by bolstering cellular waste disposal systems. In Parkinson’s there is evidence to suggest that abnormal proteins are accumulated in cells and are not disposed of properly. In particular, researchers found that ambroxol increases levels of a protein called GCase in cells. By increasing levels of GCase, ambroxol allows cells to remove waste more effectively. This would ideally keep cells healthier for longer and therefore slow down progression of Parkinson’s.

Between January 2017 and April 2018 a Phase II clinical trial was conducted by Professor Anthony Schapria and his research team at the Royal Free Hospital and University College, London.

The study evaluated the safety and tolerability of ambroxol in 17 people with Parkinson’s over six months. The investigators also assessed how well the drug was getting into the brain, how much it increased GCase, and they conducted some basic clinical assessments of disease progression in the participants. The results show that ambroxol was well tolerated (there were no reported serious adverse events during the study). The drug was also getting into the brain, and there was a 35% increase in GCase protein levels in the cerebrospinal fluid.

Clinical assessments of the participants suggest that treatment improved motor features associated with Parkinson's, but given that study was not designed to test disease modification as it was very small and there was no placebo control group, the clinical outcomes should be interpreted with caution.

In order for the medical regulators to approve the drug for clinical use in people with Parkinson's further longer and larger studies will be required to determine if ambroxol is having a disease-modifying impact.

Professor Anthony Schapira, principal investigator for the study, said: “The results of the AiM-PD study indicate that ambroxol is safe, well tolerated and able to increase GCase levels in the spinal fluid of people with Parkinson’s. This is an important step to now allow us to find out whether this drug can slow the progress of Parkinson’s. We are grateful to the patients who participated and to The Cure Parkinson’s Trust who supported the trial.”

Dr Simon Stott, Deputy Director of Research at The Cure Parkinson’s Trust, commented: “The ambroxol study is important because there are no treatments available for Parkinson's that slow, stop or reverse Parkinson's. All of the current medications only deal with the symptoms of the condition - they do nothing to delay the progression of Parkinson's. This study provides us with the 'proof of concept' that we can raise levels of GCase in humans with ambroxol, and that the drug is safe and well tolerated in people with Parkinson’s. If further study shows ambroxol can improve the health and function of cells, it may result in slower disease progression for people with Parkinson’s.”

Professor Patrik Brundin, Chair of the Linked Clinical Trials committee and Director of the Center for Neurodegenerative Science at Van Andel Institute said: “These promising results could lay the groundwork for larger studies designed to evaluate ambroxol’s potential to impede the actual disease process, a development that would be a game-changer for people with Parkinson’s. We are proud to have supported this important effort though the Linked Clinical Trials initiative and look forward to the next steps.”

The trial was co-funded by The Cure Parkinson’s Trust, Van Andel Institute and the John Black Charitable Foundation.