Two nurses from the Royal Free London have won awards at the prestigious British Journal of Nursing Awards 2016.

At a ceremony on Friday 11 March at Shakespeare’s Underglobe, Lynda Greenslade, clinical nurse specialist in hepatology, was named liver nurse of the year for her work towards improving end-of-life care in patients with liver disease. 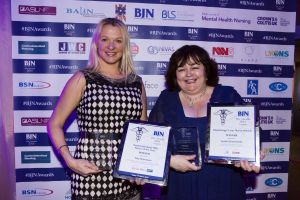 Lynda said: “This is an area that all clinicians need to be better at, particularly since the number of liver disease patients is increasing every year.

“Because these patients are usually relatively young, a lot of clinicians only concentrate on curing the disease and don’t even want to think about end-of-life care.

On winning the award, Lynda said: “It’s fantastic. Obviously it’s really lovely personally. But this is the first time the British Journal of Nursing has had a liver nurse category. It feels great for liver nurses to be recognised. There’s a whole tranche of liver nurses across the country working really hard so it is really great they are being recognised.

Kay Greveson, clinical nurse specialist for inflammatory bowel disease (IBD), was named IBD nurse of the year after setting up the travel-advice website, IBD Passport, for patients with IBD in November 2014.

She said: “Patients used to come into my clinic and ask for advice on what to do when travelling or going on their gap years – what to do with their medication, where to get travel insurance, things like that.

“I had to do quite a lot of research to find the information they were after, so I thought it would be good to have a website where patients and health professionals can easily access the information that they need.

“We have had a lot of good patient feedback. Patients have said they are better informed and feel more confident when they go travelling.”

She added: “It’s amazing to win the award. It is nice to be recognised for all the hard work that I put into it, but it’s also great for the website to get this kind of endorsement. It means that instead of only me thinking it’s a good idea, other people think it’s a valuable resource as well.”