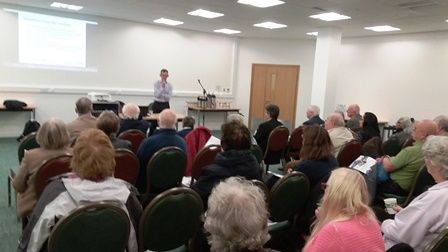 The new Chase Farm Hospital will be one of the most ‘sought after’ places to work in the NHS, its chief executive told a packed public meeting earlier this week.

Nearly 40 people attended the meeting where they heard from Natalie Forrest, chief executive and director of nursing, who outlined the services that would be in the new hospital and the work that would be taking place to inform and train staff in readiness for the move.

She said: “We want to have nurse-led care at Chase Farm, overseen by consultants, and that means we will have some of the most sought after jobs for highly qualified nurses in the country. We also want to be an important local employer and we are looking at rolling out apprenticeship schemes for people who would like to be healthcare assistants and nurses.”

Andrew Panniker, director of capital and estates for the Royal Free London NHS Foundation Trust, outlined the building work that had been completed to date and reassured attendees that the build was on schedule and there was no over-spending.

There was also a question and answer session where the audience had the opportunity to quiz the hospital leadership team in more detail about what the new hospital would have to offer and what had been earmarked for the vacant land on the site.

Attendees heard  that although the signposting on the side of the building read Royal Free London NHS Foundation Trust, the name of the organisation which runs the hospital, the Chase Farm name would not be lost and will sit proudly above the entrance.  There was also a thumbs up from attendees for improved signposting within the new hospital, which would include colour zoning.

Natalie Forrest said: “We want to make the hospital easy to navigate and have been working hard every step of the way to make sure we achieve this. We are also planning a visit for people who have dementia so we can find out from their perspective what helps them to find their way around.”

When asked about concerns about recruitment Dr McGlennan said he was confident that the new Chase Farm Hospital would be able to attract even more staff than it currently did.

Finally, as well as a commitment to all current clinical services being transferred to the new hospital the audience were pleased to hear that there would be a coffee shop, retail outlet and pharmacy within the new hospital.

One resident commented: “I want to congratulate you on building a hospital that brings us into the 21st century.”