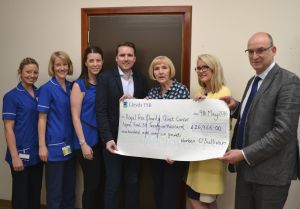 A former patient and her family have raised £27,276 and counting for the Royal Free London’s neuroendocrine 'quiet cancer' appeal.

After being treated at the neuroendocrine tumour (NET) unit at the Royal Free Hospital, Hendon resident, Noreen O’Sullivan, organised a fundraiser at the Claddagh Ring in Hendon, with a disco, buffet, raffle and auction.

Noreen said “I am so thankful to the team who looked after me. I had never heard of this type of cancer before and I wanted to give something back to the hospital.”

I was overwhelmed by the kindness of people as we received signed football shirts, Ronan Keaton tickets and Britain’s Got Talent tickets to use for the auction.”

“I had sleepless nights about how I would raise our original target of £5,000, so to get to this much and still be raising money is something special.”

The quiet cancer appeal is raising funds for research into treatment for NETs. NETs are a rare form of cancer that are hard to detect, hence the term quiet cancer. NETs are now one of the five most common cancers in the UK and twice as common as pancreatic cancer, affecting men and women of all ages.

Professor Martyn Caplin, professor of gastroenterology and lead physician for neuroendocrine tumours, said: “This amazing fundraising effort by Noreen will really make a difference to our research programme into understanding theses tumours and developing tests for early diagnosis as well as better therapies.”