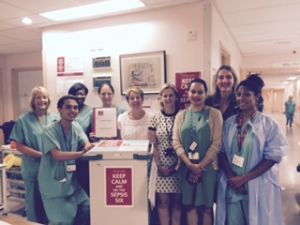 Barnet Hospital’s Labour ward has become the pilot site for a severe sepsis improvement project at the hospital.

Sepsis is one of the leading causes of maternal death in the UK. The implementation of a similar initiative at the Royal Free Hospital in 2013 has markedly improved the management of severely septic women in the maternity service. Data collected on patient outcomes have demonstrated a 10% reduction in mortality and 50% reduction in length of stay.

This approach is now being introduced at Barnet Hospital with the development of an adapted pathway and the launch of a specific obstetric sepsis trolley, as well as the appointment of sepsis champions to help raise local awareness and collect data.

Initial data has already demonstrated excellent results with 100% compliance with the new pathway in the last two months on Labour ward.

Sonia Brocklesby, consultant anaesthetics labour ward, said:  “This is clearly a challenging and exciting project for all staff. I am sure with engagement, education, and enthusiasm we will see a significant improvement in sepsis treatment for women in Barnet.”

A second pilot site is being planned at the hospital’s emergency department in the next few weeks.