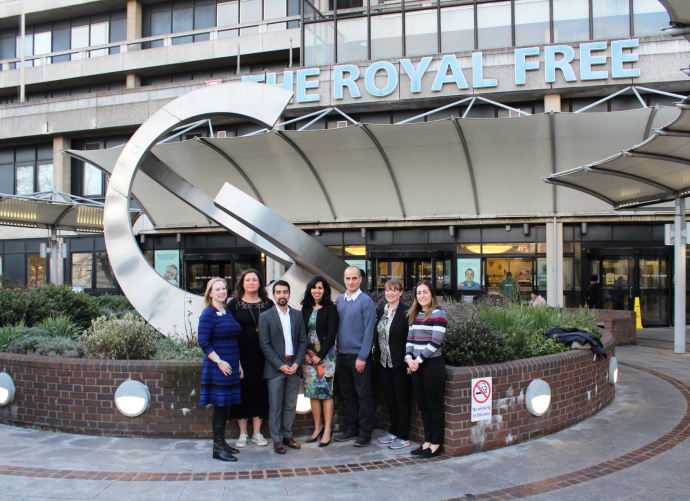 The Royal Free Hospital’s sleep and ventilation service has been nominated for an award after it cut the time patients wait for a diagnosis from 239 days to just 40.

The service, which treats patients with a range of sleeping disorders, has been shortlisted in the diagnostics team category of the British Medical Journal (BMJ) awards.

Led by respiratory, sleep and ventilation consultant Dr Swapna Mandal, the service is for patients with conditions such as obstructive sleep apnoea (OSA), a relatively common condition where the walls of the throat narrow and interrupt normal breathing at night.

Dr Mandal, said she was delighted her team had been nominated after they worked with a local GP practice to offer patients clinic appointments in the community, in order to enable patients to receive appropriate treatment sooner.

When the hospital service was set up in 2015, all patients referred were assessed by the sleep and ventilation team at the Royal Free Hospital.

However, the number of patients being referred rose dramatically in its first few years, leading to an increase in waiting times for patients to be seen.

“We realised that many of the tests could be done in the community such as a GP practice. So my clinical research fellow, Dr Nikesh Devani and I worked with Hampstead Group Practice to provide appointments there instead  so patients could avoid coming to hospital.

“It meant the diagnosis times for patients who needed a sleep study went from an average of 239 days to just 40.

“We are really delighted to have been nominated for this award – we put in a lot of hard work to bring our service to a community setting, which means we can get the right treatment to our patients much sooner.”

Dr Mandal and Dr Devani will present their work to a BMJ panel, before a final winner is announced on 24 April.

Picture caption: The sleep and ventilation team at the Royal Free Hospital