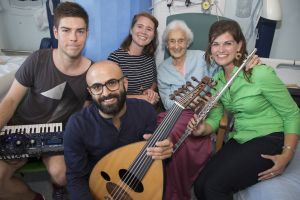 Patients at the Royal Free Hospital have praised a programme which sees some of the world’s most promising young musicians hold interactive music sessions on elderly care wards.

Music students from the Guildhall School of Music and Drama have been visiting two of the hospital’s older people’s wards each week, and giving all patients the chance to request their favourite song and even sing and play along.

The programme was organised by Laura Leadsford, director of therapy services, and is jointly funded by the Royal Free Charity and the Worshipful Company of Cordwainers. 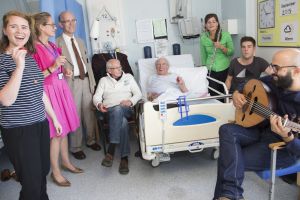 Danielle Wilde, dementia specialist occupational therapist, said the musical sessions had improved the overall mood on the wards and had been particularly beneficial to patients with dementia, who make up around half of all elderly patients.

She said: “We were having a lot of behavioural issues on the ward, and a lot of people were getting very bored and frustrated because there wasn’t enough to do.

“There is a real issue with dementia patients becoming disengaged. But when the musicians come we get most of the patients out of bed; they get up and do a bit of dancing and singing.

“It’s also about getting the staff on the ward together and having fun together. It has really improved the general mood.” 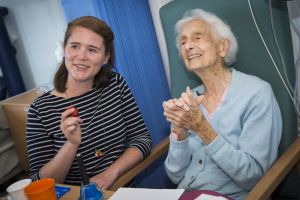 Ward 8 West patient Edna Clare Ireland, 99, from Highgate said: “I thought it was lovely. They should keep it up. I thought it was absolutely great. They gave pleasure to everybody in this room.”

Rhia Parker, Guildhall project co-ordinator, said she and her fellow students also got a lot out of the sessions.

She said: “It’s so enriching. We get as much or probably more out of it than the patients. There is so much positivity, not just from the patients but from the staff and the patients’ families.

“It’s a real privilege to hear someone tell you about how a song reminds them of when they were younger, or what those songs bring up.”