The trust has been awarded NHS England funding to work with other trusts to improve care for lung cancer patients. 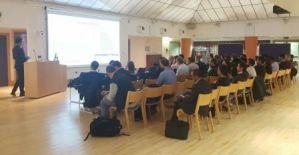 The money, which will be shared among a number of trusts in north central London including the Royal Free London, has come from the National Diagnostic Capacity Fund.

The funding will be used to support other trusts to implement a new method of lung biopsy, which has been developed by staff at Barnet Hospital.

The lung cancer team, which has won awards for their innovative approach to treating lung cancer, held a symposium last Friday aimed at teaching clinicians from other trusts about the new lung-biopsy technique.

The first pulmonary oncology, biopsy and ablation symposium (POBAS) was organised by Dr Sam Hare, who leads the lung cancer team at Barnet Hospital and Dr Ash Saini, a consultant radiologist. Dr Hare and a range of other speakers discussed techniques and patient pathways in detail so that best practise can be shared. Around 40 clinicians attended the event.

Dr Hare was this week given an innovation award by the Health Service Journal for his work in developing the new ambulatory lung biopsy service, which enables the vast majority of patients to be discharged just 30 minutes after their biopsy. The method also allows biopsy patients who suffer a collapsed lung to be treated at home as out-patients. These patients are treated with a small, compact device called the Heimlich valve chest drain (HVCD), instead of a traditional bulky chest drain.

Dr Hare said: “I was delighted to be able to talk to other clinicians about this new technique. We are already using it at Barnet Hospital and it is improving outcomes for patients and saving the trust money. I believe this treatment should be the norm across all NHS hospitals and it is really important to communicate with medical colleagues across the UK.”