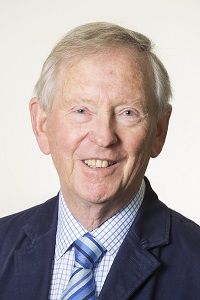 Richard Lindley is lead governor for the Royal Free London.

What does a governor do?

There are two main jobs. First, representing the interests of members of the Royal Free London and the public; and second, through the non-executive directors, holding the board to account for the way the trust is being run.

What’s your greatest achievement as governor?

Surviving the NHS paperwork of a foundation trust that now turns over nearly a billion pounds a year.

What’s the best thing about being a governor?

Knowing you and your fellow governors have helped make things just a bit easier for patients. No pay, it’s voluntary work. But I can recommend the coffee in the executive offices.

What are the most significant challenges as governor?

We are always strong supporters of the trust, but there are times when we have to be critical friends.

What profession were you in?

The media – for many years I was a television reporter for BBC Panorama and ITN News.

What’s the best piece of advice you’ve been given?

What did you want to be as a child?

When I was six there was a war on. I had a battle dress uniform just like my dad’s, and I was all ready to repel the invader. Later I was a national service soldier fighting in the Malay jungle.

Who has influenced you most?

My history teacher, who got me to try for a university scholarship.

What would you choose as your last meal?

What can’t you live without?

Do you have any nicknames?

Not that I’ve heard of.

Tell us something about you that very few people know…

I’ve always longed to tap dance but when I tried I instantly realised it definitely wasn’t for me!