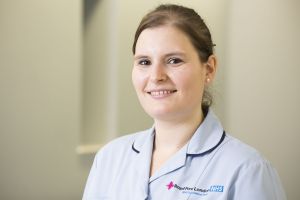 Eduarda Rodrigues’ nursing career started with her training in Viseu, Portugal, but since then has taken her first to Spain and then to London, where she currently works at the Royal Free Hospital.

The difficulty of finding a job in nursing in Portugal at first led Eduarda to take a nursing job in the Spanish city of Granada, but the desire for more stable work and better career prospects led her and her husband (also a nurse) to look at moving to the UK.

“The Royal Free has given me an opportunity for a career that my own country couldn’t,” she explains.

“We first considered the Royal Free Hospital mainly because it is in London, but then we were attracted by the range of specialities and what it offers in terms of support and opportunities.

“We applied together, came to the interviews together and then came to the Royal Free together!”

Eduarda started working as a staff nurse and after nearly one year was promoted to junior sister on 9 North ward. The opportunities for progression and the access to training and other career support are one some of the things she thinks are best about working at the trust.

“The trust saw my hard work and potential and rewarded me for it,” she says. “I’ve also had great opportunities for study, including a recent course at Kings College.”

Working with a team of dedicated nurses is also one of the highlights of Eduarda’s job.

“My team is amazing and we have a fantastic ward manager,” she says.

As a junior sister on the ward, Eduarda assists with the day to day management of the ward. This includes organising the roster to ensure that the ward is adequately staffed, as well as helping oversee patient care and supporting more junior nursing staff.

“Nursing is a hard job, but a beautiful one.”

“Every day you have people’s lives in your hands, and they can be very unwell, but if you can make them smile at the end of the day, that’s the best reward you can have.”

Eduarda’s message for anyone considering nursing is that it’s a fantastic job. And in particular, anyone who wants to come to the UK to start a nursing career should just go for it.

“The only thing I regret so far is that I didn’t do it earlier!”