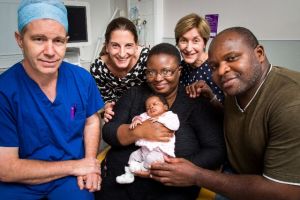 One family were so happy with the care they received from cardiology at the Royal Free Hospital that they named their baby daughter Anna, after consultant cardiologist Dr Anna Herrey. The Royal Free London spoke to the family and Dr Anna Herrey to find out more.

We met mother Noleen, her husband Jonathan and baby Anna in August, during one of their regular check-ups at the Royal Free Hospital. Despite Noleen suffering from severe heart problems, baby Anna had been delivered safely at the RFH in June and the couple were delighted to return to the hospital to see the team who had cared for them.

As the couple smiled for photos with Dr Anna Herrey, Susan Tuck and Dr Adrian England we asked about Noleen’s treatment and their experience.

Dr Anna explained that Noleen had been referred to the trust from another hospital because of the high risk her heart condition posed during her pregnancy. “Despite two previous pregnancies, Noleen had been found to have a very weak heart and at the beginning of her pregnancy had nearly died because her heart muscle could not cope with the extra work associated with pregnancy,” she explained.

For the cardiology team this was a unique case and a multi-disciplinary team including obstetrics, midwifery, anaesthetics, haematology, endocrinology and cardiology was formed to care for Noleen and ensure that baby Anna was delivered safely. “In cardiology the care of our patients is by no means straightforward. We deal with a range of heart conditions including cardiovascular disease, heart attacks and heart failure, but Noleen’s treatment was particularly complicated due to her pregnancy,” said Dr Anna.

The team provided specialist care and regular monitoring throughout Noleen’s pregnancy and she was given steroids for three weeks before an early Caesarean section to develop the baby’s lungs. She was admitted for observation two weeks before the birth. “With the involvement of all relevant teams, careful choice of medication, fortnightly monitoring and planning ahead we managed to get Noleen to 32 weeks when baby Anna was delivered by Caesarean section. We knew we could not let her continue the pregnancy to full term and at 32 weeks the outcome for the baby is good.”

Dr Anna said: “There were a couple of moments when I thought it could all go horribly wrong, but we were honest with Noleen and Jonathan from day one and they were brilliant. They did not miss a single appointment and I knew I could rely on Noleen taking her medication and getting in touch if needed. It was an amazing display of team work with Noleen right at the heart of the team, which allowed for this to happen!”

Noleen said “We are very grateful to everyone involved in our care, from the specialist team put together to look after us, to the staff on the neonatal ward, the treatment we received every step of the way was fantastic. At a very stressful and frightening time we were made to feel confident and reassured. The Royal Free really is an outstanding hospital.

“Our little girl Anna was named after Dr Anna Herrey who looked after us so well.”