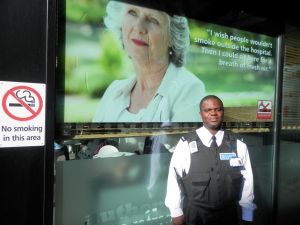 “If I see someone smoking on site I will approach them and politely tell them that the hospital has a no smoking policy and that they are not allowed to smoke on the premises.

“Most of the time people are nice and they understand that this is our policy and they move away from the premises. Sometimes people do become agitated and argue, but you just have to be calm and polite and move away from that person. Our job is not to force people not to smoke or issue penalties, it’s just to point out the policy.

“It would be nice if staff could also say something when they see someone smoking on the premises. It is everybody’s responsibility to make the site smoke free and it would make my job a lot easier if staff showed their support.”

The Royal Free London offers a specialist, friendly, confidential and responsive service to all patients, visitors and staff who want to quit smoking for good. Find out more about our stop smoking service.