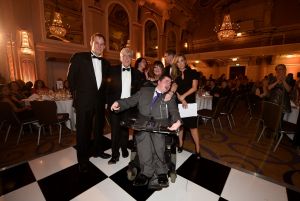 Paul Fricker was born at Barnet Hospital and now volunteers at the hospital as one of our 'sat nav' guides every Tuesday morning and Thursday afternoon.

Known by many staff, patients and visitors to the hospital for his cheery disposition, infectious laugh and upbeat attitude, Paul is a dedicated, reliable young man who takes his role of guiding people around the hospital to clinics and departments extremely seriously. Paul has also been an asset to members of staff when he assists in taking messages, post etc to various wards and departments.

"Paul always approaches all members of the public with a cheerful smile, a 'good morning' or 'good afternoon' and 'how can I help you?'

"Paul has become a highly valued and dedicated member of the volunteer workforce. Paul has a disability and slight speech and language difficulty, but does not get deterred by some members of the public who do not respond to him or sometimes ignore him. He simply puts on another smile and moves on to the next customer.

"Several members of the public have taken the time to go to reception to thank Paul and commend him for his great service and support. One such patient had collapsed next to Paul and, unbeknown to both of them, the patient had internal bleeding. Paul called for help and stayed with the man until help arrived; the man returned two weeks later to thank Paul.

In March 2016 the Royal Free London NHS Foundation Trust hosted their annual staff awards, where Paul was a deserved joint winner of the volunteer of the year award, 2016."

Image: Paul Fricker accepting his volunteer of the year award