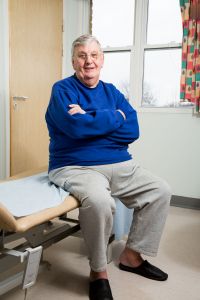 In February 2015 82-year-old Derek Martin tripped over his front doorstep and fractured his right hip. He was taken to the A&E at Barnet Hospital and within 22 hours was undergoing elective surgery for a full hip replacement.

Derek was fast-tracked through the system as part of a joint effort by the Royal Free London’s fractured neck of femur service, which aims to get older patients suffering hip fractures back on their feet as soon as possible.

The initiative is a collaboration between orthopaedic surgeons and doctors, nurses, physiotherapists and occupational therapists from the orthogeriatric team. The team aims to get elderly patients who arrive at the A&E at Barnet Hospital with a fractured femur admitted to a ward within four hours and into surgery within 36 hours of admission.

Derek said: “I was taken to Barnet Hospital A&E and in what felt like no time at all I was up on Beech ward. A surgeon came down that day to explain that the best course of action was to have a total hip replacement on my right side and told me that I could have the operation the next day.

“I was in shock at first. I felt angry at myself for letting this happen. The last time I had been in hospital was 1937 when I had my tonsils out, so I was also a bit apprehensive. But the doctors and nurses were very reassuring.

“After the operation I worked with a physiotherapist every day. When I was discharged the physiotherapist gave me a recovery plan and the occupational therapist made sure I had everything necessary to adapt the house to my needs.

“When I broke my hip I was afraid that I would suddenly turn into an old man and not be able to do the things I used to do like walk the dog and play golf. But thanks to Barnet Hospital I was able to start cooking for myself after about a month and have even started taking the dog for a walk. Hopefully I will be able to start playing golf again soon.”

Find out more about our trauma and orthopaedics service.