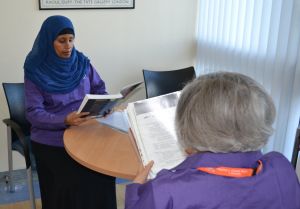 Betty Hicks was born at the Royal Free Hospital and now acts in the capacity of a voluntary English language teacher for the voluntary services department, teaching other volunteers oral English.

"Many years ago when I became a Girl Guide I immediately went back to the Brownies as a helper. This was the beginning of my volunteering and just seemed natural. Later on when I became responsible for large arts and conservation sponsorships and for international charitable programmes I was still able to continue occasional volunteering.

"Just before I retired I took a teaching English as a second language course which enabled me to volunteer on Camden Council’s job-seekers’ English-language programme, then five years with Haverstock school’s ethnic minority achievement service.

"Several of the Royal Free volunteers hope to eventually join the hospital staff – they have a medical qualification but they know that they need to improve their English skills. My voluntary role is to help them improve their language skills.

"Why did I choose the Royal Free? Well, I was born at the Free when it was based in Gray’s Inn Road near Kings Cross. Then, when the new Royal Free Hospital opened in Pond Street in 1974 I was already living locally so I feel we are inextricably linked."

Image: Betty with one of her students, volunteer Deqa Egal.

Deqa is also a volunteer and one of Betty’s students. Deqa is originally from Somalia and qualified as a doctor in Moscow, where she married and raised a family before moving to London. She now hopes for a job at the Royal Free one day. She says: “I love medicine and I would like to start building up my qualifications again over here.”