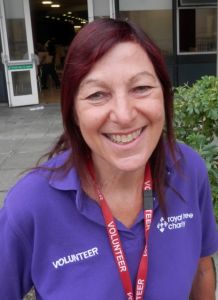 “I work at the Royal Free Hospital three days a week in a ‘front of house’ role, meeting and greeting patients as they arrive and directing them to where they need to go. I actually worked at the Royal Free for 20 years as an administrator and following my retirement three years ago I took two weeks holiday before returning as a volunteer! I wanted to be with people, helping them, rather than working at a computer.

"I started by serving teas, coffees and lunches on the wards and also undertook dementia training and a patient feeding course, but then my knowledge of the hospital was called upon when the check-in kiosks were introduced. I was asked to be on-hand to support patients in using the kiosks but I soon found there was a greater need to direct and escort patients to the place they needed to be. My most memorable moment was when a lady came through the main doors in an advanced state of labour, there really was the possibility that she would give birth right there and then! I had to act very fast to get her in the lift and up to maternity, I’m sure she must have given birth only a minute or two after I handed her over to the midwife.

"One of the nice parts of volunteering is getting to know regular out-patients. I have become friends with some of them and when, on occasion, they have been admitted, then I’ve been able to go and visit them on the wards. I’ve also become close friends with many of the other volunteers.

"It’s so satisfying to know at the end of the day that in a small way I’ve been able to help so many people.”