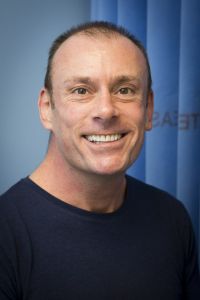 He came in to see the team at the Royal Free Hospital in February and discussed his treatment with a variety of staff members, including surgeon, Faiz Mumtaz, and clinical nurse specialist (CNS), David Cullen. Mr Ellis said he was delighted with his care from the start.

“The treatment here has been brilliant,” he said. “The staff really took the time to explain things to me and they let me ask questions,” he said. “I never felt rushed, even though I know they are all very busy. There are also lots of leaflets about the surgery and what I could expect, so that was really helpful.

“The best thing is that there is a CNS who you feel is really looking after you. You can call or email them if you have any concerns. I emailed once and David called me back half an hour later. That just puts you at ease.”

Mr Ellis had surgery to remove his tumour in March and was able to go home four days after the operation.

Mr Ellis praised the care he received from Mr Mumtaz, and added: “I know how busy consultants and surgeons are and how limited their time is, but Mr Mumtaz really is a shining example. Throughout this whole period he has taken such good care of me and really gone out of his way to ensure that I've received the highest level of care.”

Mr Mumtaz carried out the operation with the help of da Vinci, a surgical robot. He explained that the robot enabled him to remove the tumour and only a small part of the normal kidney tissue, so that as much as possible of Mr Ellis’s kidney could be retained.

Mr Mumtaz said: “The robot also allows me to see a three-dimensional magnified image of the kidney which enables me to distinguish between healthy kidney tissue and the tumour and means the surgery can take place safely.

“During surgery the blood flow to the kidney needs to be stopped so we clamp the renal artery. If this takes more than 25 minutes it can affect the kidney function. Because the surgical robot allows me to remove the tumour more quickly, this reduces the clamping time and preserves normal kidney function.”

Find out more about the kidney cancer centre at the Royal Free Hospital.