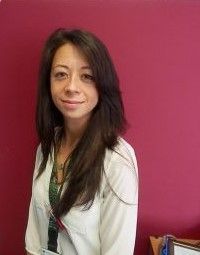 As a specialist bereavement midwife at the Royal Free Hospital (RFH), Alina Lau is trained to provide emotional support and care to women who have suffered a pregnancy loss or the death of a newborn.

“My job is to act as the bridge between the people affected by pregnancy loss; between parents, clinicians, the lab and the mortuary,” she said. “It’s also about creating a network of support for parents after they leave hospital. I refer them to women’s health, clinicians and in-house consultants. I keep them informed, and connect them with external organisations, such as bereavement charities.

While a bereavement midwife has been in place at Barnet Hospital’s maternity unit for some time, Alina was asked to launch the role at the RFH – something she admits was fairly daunting.

She said: “It was like walking into a big blank room and being asked to decorate. I wasn’t sure what to say to the parents or how to engage with them. Because of the minimal framework I had, I was terrified of saying the wrong thing.

“I don’t have any counselling training. But a lot of it is just picking it up as you go along. It’s mainly just listening to the parents, being there for them and trying to answer and act on their questions.”

Alina said that despite the obvious challenges, specialising in bereavement can be as rewarding as any midwifery role.

She said: “You become a midwife because you want to facilitate life and be part of the experience of birth. But when that birth is not successful you can have just as much of an impact, if you do it well.

“I get great feedback from mothers who, even in extremely difficult circumstances, tell me ‘you made the whole process easier. You understood what was going to happen, you prepared me.’

“I also have staff who say that knowing that I was there working in the background had really helped.”

She added that adapting to the unusual and challenging role had helped her develop her skills as a clinician.

“It has made me a lot more patient,” she said. “A lot of what you do is about taking cues from patients so you can provide a service that is specific to them. You can’t just lay out a plan and execute it the same way every time.”

Despite the rewards, Alina admits that working in such a difficult specialty can sometimes take its toll.

“There are times when I become more emotionally involved than others,” she said. “You do go home and think about what has happened that day. It helps that I have a supportive line manager, and mortuary manager who walked me through the legal frameworks.

“It also helps to strike a balance. Even though I am a bereavement midwife, I do work normal shifts on the labour wards, which reminds me that there is joy in pregnancy.”