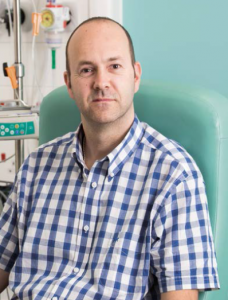 “I had never even heard of Pompe disease. Then one day I was diagnosed with it.”

Andy, who is married to Cindy and has four children, has been living with Pompe disease for over two years.

Like many people, until the day of his diagnosis Andy had never heard of the rare muscle wasting disease, which isn’t curable and can affect simple day-to-day tasks.

“My illness affects all the things that I used to take for granted, such as bending and lifting and running around after the kids. It was such a shock.

“It’s a rare genetic condition and only three centres in the UK specialise in treatment. Luckily for me, my consultant quickly recognised the symptoms and referred me to the lysosomal storage disorders unit at the Royal Free.

“I had the chance to take part in a clinical trial. Since then I’ve been coming into the hospital’s brand new Institute for Immunity and Transplantation every two weeks for enzyme replacement therapy.

“I drive up early in the morning and my regular nurse, Allison Warwick, prepares my drug and attaches me to the drip and the therapy takes about five and a half hours.

“I’m closely monitored throughout and have my vital signs, blood and temperature taken frequently.

“At first, the thought of a clinical trial was scary. But the doctors and clinical nurses soon put my mind at rest and I wanted to use their expertise and knowledge in a positive way.

“I have already seen minor improvements and my progress is being constantly evaluated. As well as helping me, I know the clinical trial will help patients in the future and give us a better understanding of the condition.

“The new institute is much better than the old ward where I used to be treated. But most importantly for me, it’s a place where I can spend time with patients in a similar situation to me and it really helps to talk and share our experiences. I see the same staff every fortnight and we are all on first name terms. I’m treated like a friend rather than a patient.”