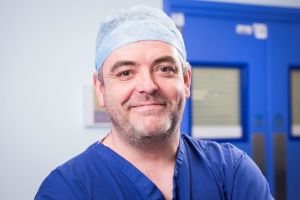 Patrick Hoban, senior operating department practitioner (ODP), began his training at the Edgware General Hospital 25 years ago, having first joined the organisation as a hospital porter.

“When I came to the UK from Ireland my brother was working as a porter at Edgware General, so I joined him there. At some point they suggested I become an ODP so after I passed the interview process I started my training.

“Since then I’ve worked at Barnet Hospital as an agency ODP and then at Ealing Hospital. I joined the Royal Free Hospital last year.

“I’m an anaesthetic ODP, which means I am there to make sure the anaesthetist has everything they need to care for the patient during their surgery. I make sure all the right drugs are there for the patient and that they have all the equipment they need. I also act as a second pair of eyes before and during surgery in case anything goes wrong.

“The work varies a lot. We do a lot of complex surgery here at the Royal Free. As an ODP the job should broadly be the same, but obviously the more complex surgeries can lead to more complications.

“I personally like routine but it does get interesting. If you have emergency surgery come in at 3am it can be fast paced and you get an adrenalin rush.

“It can be intimidating joining such a big organisation at first. There are a lot of people to get to know even in your own department, but it’s a friendly place so it doesn’t take long to get stuck in.

“If you’re looking for challenging, interesting work then the Royal Free has got it. It can be quite fast-paced and you can be given a lot of responsibility fairly early on. But if you can embrace the challenge then it’s very rewarding. Because of the number of specialties they do here it’s a great place to be if you’re at the beginning of your career.”