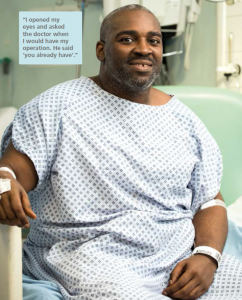 “I opened my eyes and asked the doctor when I would have my operation. He said ‘you already have’.”

Ukpong Anderson was a youth worker in Islington, the borough where he lives, before he was diagnosed with an aggressive form of bowel cancer on Good Friday 2013.

“I had acute stomach pain and didn’t think anything more of it at the time. Of course, now looking back, I had been lethargic for a couple of months but just got on with things. Then I was diagnosed with stage four bowel cancer, an aggressive form of the disease.

“I had surgery at UCH followed by nine months of chemotherapy. Since then, the cancer has spread to my liver and I have come to the Royal Free Hospital for surgery to remove the growths.”

Ukpong’s surgery took place in the hospital’s new operating theatres, which opened in 2014, together with a new intensive care unit. Ukpong spent two days in intensive care after a five hour operation to remove the growths from his liver.

“My experience at the Royal Free has been positive and I have had really good one-to-one nursing care in ICU since my operation. There is good communication between the nursing staff assigned to me. I’m moving to 9 west ward later today.”