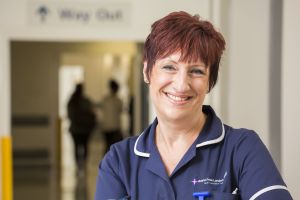 Julie Oliver, ward manager on the clinical decision unit (CDU) at Barnet Hospital, decided to pursue a career in nursing as a mature student.

“I had three small children when I decided nursing was the career for me,” she said. “Working as a healthcare support worker at the Princess Alexandra Hospital confirmed that I had made the right decision and I began training as a mature student with the University of Hertfordshire, based at the Queen Elizabeth II Hospital in Welwyn Garden City.”

After qualifying Julie starting work at the Princess Alexandra Hospital, enjoying a variety of nursing roles in general medicine, surgery and a specialist breast unit. She then became a stoma link nurse, before working in an emergency assessment unit which covered all areas from gynaecology, acute medicine and surgery to orthopaedics.

“Working in a range of roles was really beneficial,” said Julie., “I was able to gain a variety of experience and within five years of qualifying I was promoted to sister.”

In 2008 Julie was diagnosed with breast cancer and was cared for by her colleagues at the Princess Alexandra. When she returned to work she took on the role of practice development nurse, supporting nursing staff in their development. A particular focus of Julie’s job was assisting overseas’ nurses in settling in to their roles in the UK, an aspect of her role at the Royal Free London which she is passionate about.

Julie became ward manager on the CDU at Barnet Hospital in July 2015, overseeing the day to day running of the ward and managing 30 members of staff.

“I absolutely love it here!” she says. “It’s so friendly, like one big family, everyone is so approachable and I could not have had better support.”

Julie is dedicated to developing her team and being a role model to them.

“One of the things I love is watching staff grow personally and professionally. I really am passionate about teaching and developing staff at all levels. My son is an ITU [intensive therapy unit] nurse working overseas so I know what it takes to give support from a nurse’s, a professional’s and a mother’s point of view. The recruitment programme at the Royal Free London has brought in some fantastic calibre overseas nurses and I am working closely with them, providing mentoring and training.”

“Of course I’m also passionate about patient care, from my experience I know what good and bad care looks like and I’m committed to our patients receiving world class care. To be able to care for our patients is the best job in the world, it’s a real privilege to be let into someone’s life in the way that we are.”

Julie feels as though Barnet Hospital really stands out as a place to work.

“There is a different ethos here,” she says. “When I started at the trust everything was so organised. The inductions, orientation, peer network and support from my matron were all fantastic. Our staff genuinely live the world class care values. I feel recognised, valued and respected; my opinions and decisions are supported and individuals go out of their way to give thanks for a job well done.”

“I love it here!” she said. “I would thoroughly recommend it to anyone.”