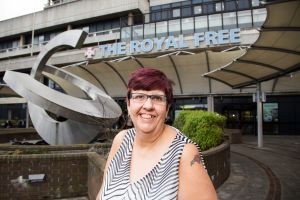 After suffering an abdominal aortic aneurysm, Michelle Tucknott underwent an operation at a hospital on the south coast to repair the damage. However, due to complications the operation was halted after two-and-a-half hours leaving her in significant discomfort and no closer to recovery.

The retired care worker was transferred to the Royal Free Hospital, which specialises in repairing complex aneurysms, and placed in the care of the aortic team and world-renowned vascular surgeon Tara Mastracci.

“Tara recommended I have a fenestrated endovascular graft that would be inserted inside my aorta using keyhole surgery. She was lovely. She took me through all my options and asked me what I wanted to do. After I opted for the graft she took me all the way through what was going to happen next.

“The graft was designed especially for me by the Royal Free Hospital’s aortic team before being hand made by a company in Australia.

“When I was referred to the Royal Free Hospital I was slightly nervous about all the travelling I would have to do from my home in Worthing. Before I went in for my first operation at the other hospital I was given loads of different dates for each different procedure. It was a pain, especially when I couldn’t drive and I had to get the train up. It was quite tiring.”

“But the aortic team at the Royal Free Hospital explained they were trialling a ‘one-stop-shop’ system, which means I go to as many of my pre-op appointments as possible in a single day. In one day I had my bloods taken, my swabs and scans done, and I met with the surgeons to talk through the procedure. It’s a much better system, especially for people like me who have to come from far away.”

Michelle had her operation in November 2014 and was discharged a week later. She is now under the care of the aortic team as an out-patient.

“I was so happy with the level of care I received at the Royal Free Hospital. Tara is my hero; she has saved my life.”