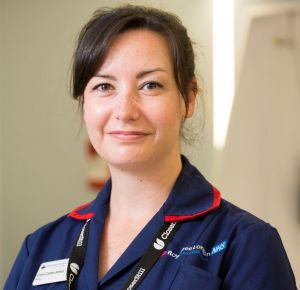 Clare Carter-Jones, cardiology matron at the Royal Free Hospital, has a lot of nurses in the family. Despite this she was still undecided about whether nursing was the right career for her until she took a job as a healthcare assistant while she was studying.

“It was the best job I’ve ever had,” Clare says. “I learned so much, and the ward became like a family.”

Her experience as a healthcare assistant confirmed her plans to become a nurse, and after completing her nursing degree in Bristol she started her career as a newly qualified nurse in 2003. Starting in cardiology in Southmead Hospital in Bristol, she moved on to the A&E department in the Bristol Royal Infirmary in 2004 and then to Royal Free Hospital’s A&E department in 2008.

“At first I thought I would naturally go into academia from there,” she explains. “But I missed the clinical environment, and I was excited about how what I was learning could be applied practically to improve the service that we provide to patients.”

After finishing her master’s degree, Clare returned to her post as an A&E sister at the Royal Free Hospital. However, she was keen to move back into ward nursing and clinical leadership.

After discussing this with her matron, Clare was transferred to 8 North ward as their ward sister. “I had no idea what to expect, but I absolutely loved it there,” she says. “It’s a lovely team, and I loved being their ward sister.”

Following her time on 8 North she went to 8 East, where she led an improvement project as their ward sister for six months, and then began work in cardiology. In her current role she leads the nursing teams who work within the in-patient areas on 10 West and the coronary care unit, and the cardiac catheter labs which incorporate a busy heart attack service.

As the matron, Clare is responsible for a 50 strong nursing team. As well as managing the nursing staff, she has responsibility for the clinical environment, the safety and the quality of care, ensuring the ward and cath lab run smoothly, and identifying and implementing service improvements.

“The Royal Free is really great at growing talent and developing their staff. It doesn’t matter who you are, if you work hard and have the ability, you have the opportunity to do well.”

“The values are one of the best things about the Royal Free London,” Clare says. “Everyone believes in them, and we all take responsibility for making sure everyone understands and abides by them.”

As well as thinking the Royal Free London is a great place to work, Clare speaks very highly of nursing as a profession in general.

“It’s a career where sometimes you have to sacrifice a lot, but it gives a lot back. You get to see and do things you wouldn’t get to do in any other career, and it’s a great privilege to work alongside some inspirational people. You make friends for life.

“I’m incredibly proud to work alongside my team, they impress me every day with their compassion and expertise. They inspire me to work harder for them, to listen to what they need to enable them to deliver the care they want to provide. Getting the best out of my team and watching them do well, from nursing assistant to senior sister, is the best part of my job as senior nurse.

“It’s also a great privilege to be by patients’ bedsides. From working with a team who can pull together very impressively and save a life, to caring for someone and their family to allow a dignified death is one of the greatest things you can do.”