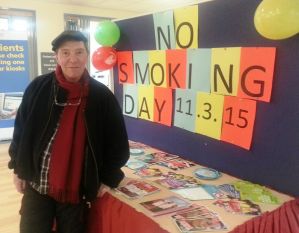 Before he quit, Harold King, 65, had been smoking for 49 years and was getting through 40-50 cigarettes a day. He had made two unsuccessful attempts at quitting before being diagnosed with chronic obstructive pulmonary disease (COPD). With the help of the smoking cessation service he has not smoked for six months.

“When I was first diagnosed with COPD I had no symptoms. It was only when I started struggling to breathe that I decided I needed to stop smoking.

“The Royal Free London stop smoking service was really helpful. I had a good relationship with my smoking cessation advisor, which was really important to me. I felt that she wanted to help me and understood me. She wasn’t judgmental and listened to my story and asked me questions. She treated me as an individual.

“I told them that I wanted to cut down and then stop and they were very supportive.

“I was anxious about stopping, particularly as I used smoking as a coping strategy when I felt stressed.

“The thought of stopping for life seemed overwhelming, so I decided to take things one day at a time and not beat myself up if I had the occasional lapse. I set myself small achievable goals.

“I decided to use Champix, a prescription-only nicotine-free medication, because it had worked for people I knew.

“Since quitting I am generally less anxious because I’m not constantly thinking about when I can fit in my next cigarette.

“I am significantly less breathless and can walk further without stopping to catch my breath. I have saved money, my food tastes better and I am able to socialise without having to keep leaving my friends to have a cigarette.

“I would recommend the Royal Free London’s smoking cessation service to anyone.”

The Royal Free London offers a specialist, friendly, confidential and responsive service to all patients, visitors and staff who want to quit smoking for good. Find out more about our stop smoking service.