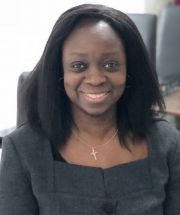 Doris held senior positions in the UK and overseas including head of HR, Ford Motor Company, Australia & New Zealand and most recently HR director, Ford Motor Company for Europe, Middle East & Africa with responsibility for around 25,000 employees across 30 countries. She also led Ford’s African Ancestry Network and was named by Autocar as one of the top 100 most influential women in the Auto Industry.

Doris is non-executive director for the Chartered Institute of Legal Executives, Clarion Housing Group, University of East London, a lay member to the HM Courts and Tribunal Service and currently freelances as an HR consultant.

She is also a non-executive director of the Royal National Orthopaedic Hospital NHS Trust in Stanmore, London, and a member of the RFL trust’s audit committee and remuneration committees and chair of the equality, diversity and inclusion taskforce and the people committee.