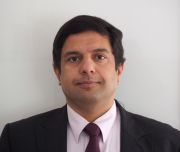 Ashutosh Wechalekar is a senior lecturer and honorary consultant haematologist at University College London and the Royal Free London NHS Foundation Trust.  He trained in haematology in the UK and Canada.  In 2004, he joined the UK National Amyloidosis Centre as an honorary senior research fellow funded by a grant from the Leukaemia Research Fund.  In 2007 he was appointed senior lecturer/honorary consultant in the National Amyloidosis Centre and department of haematology.  His academic and clinical interests are focused on amyloidosis and multiple myeloma.  In particular, he is interested in characterisation and treatment of systemic AL amyloidosis as well as multiple myeloma, including clinical trials of new and novel agents in these disorders.  He has published widely in these areas.