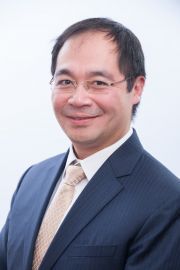 He has been working in north London for a number of years, including as chair of Barnet, Enfield and Haringey Mental Health NHS Trust.

Prior to working in healthcare, Mark was a senior executive in information technology and telecommunications, and brings many years of global experience in transformation and strategy. He began his technology career during the dotcom boom, training at web start-ups before moving into telecommunications and IT.

Mark’s longest association was with BT Group, where he was a senior executive, finishing his career there as chief technology and information officer of Openreach, the national infrastructure provider. Prior to BT Group, he led a number of digital initiatives at major global businesses, including Carphone Warehouse and Siemens.

He comes from Singapore originally and has lived in London for over 20 years. He holds a degree in English literature from Oxford University and is a Fellow of the Royal Society of Arts.