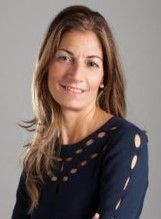 During the period of 1999-2001, she completed two years in research in obstetric ultrasound at St George's Hospital University and in 2004 she holds a doctorate of medicine of the University of London and she gained the advanced diploma in obstetric ultrasound for the Royal College of Obstetricians and Gynaecologists (RCOG).She achieved multiple publications in peer-reviewed journals.

She is an examiner of the University of London for the MBBS degree. She is actively involved in the training of obstetricians and gynaecologists at all levels. She runs regular workshops in laparoscopic surgery and basic surgical skills.