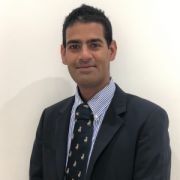 Mr Paddy Subramanian is a consultant orthopaedic surgeon specialising in hip and knee disorders.  He has a special interest in hip and knee replacements including primary and revision surgery. He also performs hip and knee arthroscopies (key hole surgery).

In addition, Paddy undertakes a wide range of trauma surgery and in particular, he has an interest in treating patients who have sustained complex upper or lower limb injuries.

Paddy graduated from Imperial College and trained in the prestigious UCL & Middlesex orthopaedic rotation. During his training, he was awarded a scholarship to study at Oxford university where he undertook a MSc in musculoskeletal science.

He has completed his subspecialty training with Professor Middleton at the Royal Bournemouth Hospital, which is widely accepted as one of the UK’s highest volume arthroplasty (joint replacement) fellowships.

Before starting this consultant post, Paddy has over 5000 logged surgical cases including performing over 500 hip and knee replacements.

Paddy is broadly published including being the lead author in one of the most read articles in the British Medical Journal. He has presented nationally and internationally and has won numerous prizes.

He also maintains active involvement in audit, training and education.