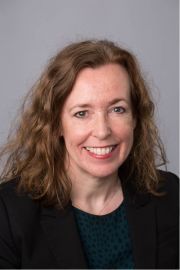 Sarah was appointed as an associate non-executive director in December 2021.

She has been executive director of supervision at the Financial Reporting Council since September 2021 and is responsible for overseeing audit quality reviews, corporate reporting reviews, audit firm supervision, audit market supervision and professional oversight teams. She is also a non-executive director and senior independent director ( SID) at the North Middlesex University Hospital NHS Trust.

From 2016-2021, Sarah was the director of authorisations at the Financial Conduct Authority, and prior to that she was a member of the Home Office Board as the first director general of UK Visas and Immigration, responsible for overseas visas, in-country immigration and asylum. She was also chief executive of the Identity and Passport Service (now HM Passport Office) from 2010-2013.

Before joining the civil service in 2005, Sarah’s career was in retail financial services and included management positions at American Express, Barclays and Woolwich plc. She graduated in mathematics from Lancaster University and has an MBA from London Business School.