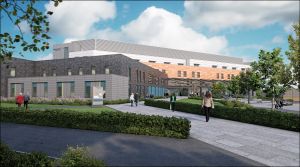 A redevelopment of this size has taken major strategic planning and preparation.

The Royal Free London NHS Foundation Trust committed to redeveloping Chase Farm Hospital, making it fit for purpose to deliver 21st century healthcare and to provide world-class care close to where our patients live, following the acquisition of Barnet and Chase Farm Hospitals NHS Trust in July 2014. The future of the hospital as an elective site with urgent care facilities had already been set out within the Barnet, Enfield and Haringey clinical strategy published in 2011.

In December 2015 Enfield Council planning committee approved our application to make amendments to the outline redevelopment proposals it considered in March. The main change was an alteration to the shape and orientation of the building to give us greater flexibility to expand the hospital in response to future local needs. Read more: Chase Farm alterations approved.

In March 2016 the government approved the full business case. In total the government is contributing almost £82 million towards the redevelopment, with the shortfall being met by the sale of surplus land and the funds invested by the Royal Free London. Read more: Chase Farm redevelopment gets final go-ahead.

Preparation of the site began in September 2015, with demolition and enabling works. Main construction work started a year later.

The trust was pleased to receive a planning report from the Greater London Authority (GLA) in 2015 which was strongly supportive of the proposed redevelopment in strategic planning terns. In particular the report welcomes the proposal to use surplus land for a new primary school and additional housing, highlighting the commitment to provide key worker accommodation and a high proportion of family-sized homes. The report also contained a number of recommendations that the trust will continue to work through in partnership with Enfield Council, local residents, the GLA and other local stakeholders.