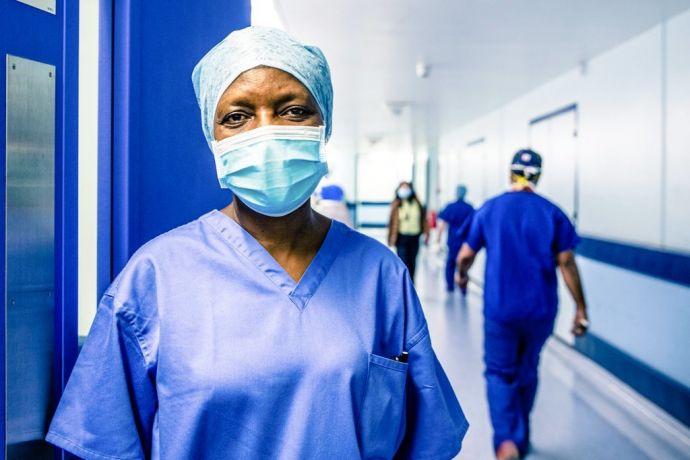 In 2014 she was asked to set up the robotic surgery programme from a nursing perspective and she travelled with a team of clinicians to France and New Delhi in India to learn the latest techniques. Since then the robotics team, which performs kidney transplants and kidney cancer operations with the use of surgical robot, has trained other teams across the UK and Europe.

Then, in March robotic surgery at the Royal Free Hospital came to a stop so that resources could be directed towards treating patients with COVID-19.

Angeline said: “Some of the Royal Free London’s kidney cancer surgery continued at Westmoreland Street Hospital – part of University College London Hospitals – so I went there to assist and support them for a few days. But I also became a theatres coordinator – ensuring we had nursing staff for emergency surgery and sending some staff to work in ICU.

“At that time, emergency work was the only surgery taking place, we had just five theatres running.

“Now we are in a much better position. Robotic surgery is up and running again – we did our 20th robotic kidney transplant last month as well as a number of kidney cancer surgeries. All 19 of our theatres are open and we’re getting through the waiting lists.

“We have developed pathways to continue with our elective work - despite the threat of the second surge - so we are really hoping we can continue through the winter.”