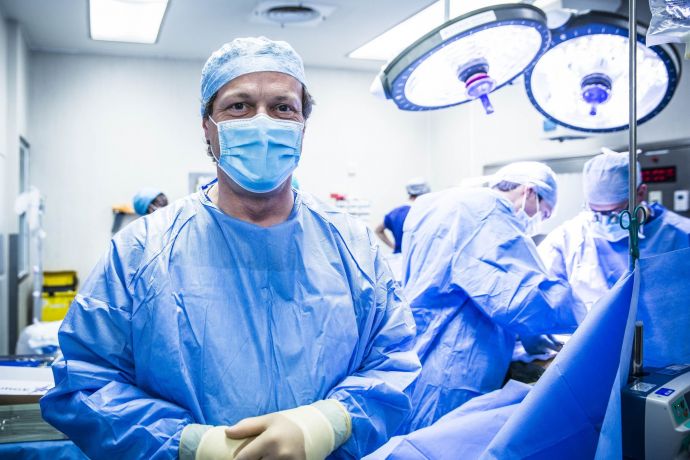 Joerg joined the Royal Free Hospital in 2016 and says one of the things that he feels most proud of in his role is the mentoring work he does with younger colleagues and new staff members.

But when COVID-19 hit no-one could have forseen the huge learning curve for all his staff.

He said: “The number of theatres available was massively reduced so we had to prioritise urgent cases. We managed to keep the liver transplant service up and running – despite  not being able to perform a single liver transplant for six weeks - and moved  the HPB cancer service to Princess Grace Hospital. At the beginning hours of every day were spent trying to plan and prioritise patients.

“At first we had to draft in anaesthetists from other trusts because ours were needed to support colleagues in ITU but as time went on it was recognised that critical cancer treatments were needed as well and we were able to once again build up the pathways to facilitate that. I’m proud to say that at Princess Grace we didn’t have a single cancellation at that time as a result of lack of ITU beds, even though it was very limited there, and that was thanks to really well-thought-through patient management.”

During this time Joerg also took on the role of NCL HPB cancer lead which meant he led on the work to prioritise patients from across north, central and east London. The HPB service was closed at Princess Grace on September 7 and re-opened at the Royal Free London on the 8th.

Joerg said: “There is no backlog in our service and that’s absolute testament to all the team and the trust who worked incredibly hard to make sure patients got the urgent care they needed.”

Liver transplants are also up and running again but Joerg admits the second wave of COVID-19 is starting to have an impact on patients as ITU beds become scarcer again.