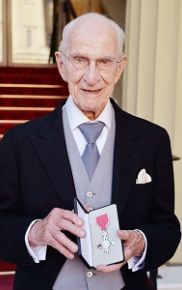 At 103 years of age, Dr Bill Frankland MBE is the father of allergy as we know it today. His distinguished career in allergy began after World War II when he returned to work at St Mary's Hospital, London, as a survivor of an infamous Japanese prisoner of war camp. Dr Frankland was formerly an assistant to Professor Sir Alexander Fleming, the discoverer of penicillin.

He met Mahatma Gandhi in the 1930s when he spoke at Oxford, and was briefly Saddam Hussein's physician and persuaded him to stop smoking. He has received many honours, including having the St Mary's Hospital Allergy Unit Named after him, and also the BSACI's award for clinical excellence in allergy - The William Frankland Award.

We anticipate this to be a popular talk and spaces are limited, if you are interested in attending please contact m.solotan@ucl.ac.uk.

This event has been organised by UCL Applied Medical Sciences.