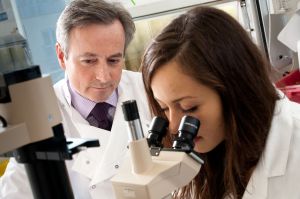 Professor Anthony Schapira, director of the UCL Royal Free Campus, has been awarded a £1 million grant by the Medical Research Council (MRC) to advance studies on a possible new treatment for Parkinson’s disease. This is one of only three large MRC experimental medicine grants awarded across the UK.

It is hoped the research will lead to preliminary trials by 2016 for a treatment, which earlier work has indicated could slow down the progress of the disease.  Research carried out at the Royal Free Hospital shows promising results using human cells.

It is known that around 10% of Parkinson’s sufferers have a gene mutation that significantly increases the risk of developing the disease.  It causes an enzyme called GBA to reduce its activity in the human body. This promotes the accumulation of the protein synuclein which clogs the brain cells affected in Parkinson’s disease and stops them functioning properly. The new treatment is based on the work of Professor Schapira’s group on the GBA enzyme and it is hoped that it will be particularly suitable for Parkinson’s sufferers with this gene mutation, but also for those without.

The research on this development was helped by a £175,000 grant from the Javon Trust,awarded to Professor Schapira’s research team by  the Royal Free Charity.  This earlier work enabled research to progress enough to secure large-scale funding to take it to the next stage.  The MRC grant will enable the continuation of this research leading to preliminary trials involving patients to see how the signs and symptoms of Parkinson’s may be delayed.

Professor Schapira said: “I am delighted with the award which will help us and our colleagues in the lysosomal storage disorders group to continue our research in an exciting area of Parkinson’s disease. We are also grateful to our other supporters from Parkinson’s UK and the Javon Trust for helping us bring this project to this stage. The early signs of this research are promising, but much work lies ahead.“