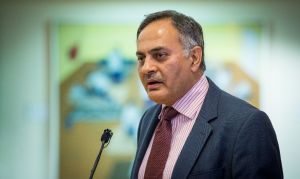 Haemophilia experts from across the world came to the Royal Free Hospital to take part in the 50th anniversary of the Katharine Dormandy Haemophilia and Thrombosis Centre (KDHT), along with patients and staff.

The event, on Friday 17 April, was led by Professor Amit Nathwani, who is the director of the KDHT.

A range of speakers were invited to share memories of Katharine Dormandy and to talk about her work. There were also talks on the way that haemophilia treatment has changed and how it might look in the future.

Professor Nathwani said he was “humbled and honoured” by the number of haematology experts attending the event. “This is testimony to where the centre stands in this field,” he added.

When the centre first opened there were only five patients and as numbers grew more space was required. The Haemophilia Society came to the rescue and donated a large caravan – some patients recall receiving treatment in the caravan. By 1970 the centre had 180 patients and had outgrown the caravan. This time the Haemophilia Society funded an extension of the Ward 7 at Lawn Road.

In 1977 the Haemophilia Society presented the first RG Macfarlane Award to Katharine Dormandy for her outstanding contribution to the social and physical wellbeing of people with haemophilia and related disorders. She was determined to establish a first class haemophilia centre at the Royal Free Hospital and set up an appeal to finance a purpose-designed building. The centre was completed before her death in 1978.

Professor Nathwani said: “This event was a wonderful celebration of Katharine’s work. Her goal was to improve the treatment of patients and also their quality of life. The centre has made a great contribution in both these aspects of patient care and has played a pivotal role in developing new treatments.

“The patients have played an important role in developing these new treatments, occasionally putting their lives at risk. They have also supported the centre generously by contributing to the fund raising drive that was spearheaded by Katharine Dormandy to build the new centre.”