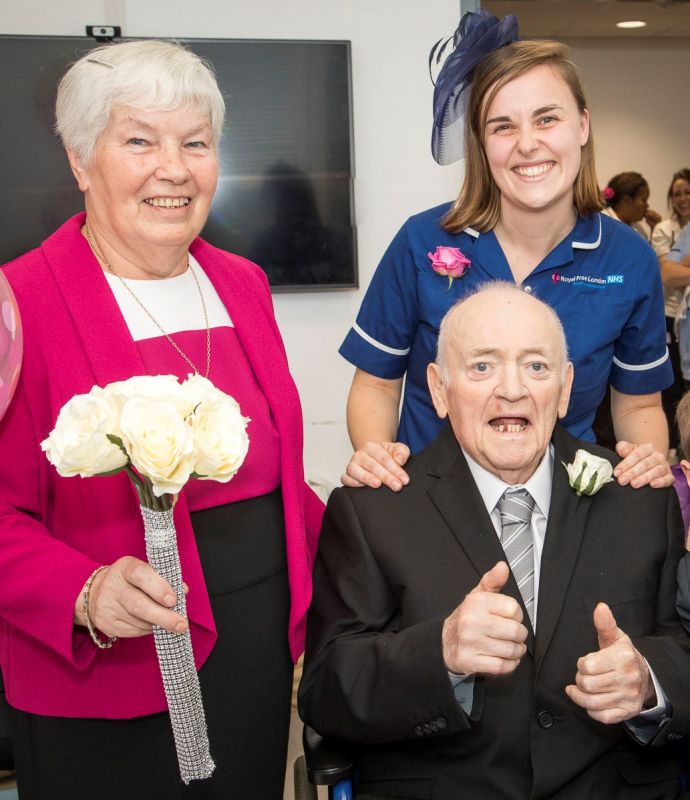 A couple who have been together for 42 years have finally tied the knot - on a hospital ward at the Royal Free Hospital.

Nurses on the ward helped David Kavanagh with his wedding plans – measuring him up for his suit and decorating the hospital room which played host to the big day.

David, 74, and Margaret Emberton, 75, who live in Cricklewood, took their vows last week in front of a registrar on ward 8E surrounded by family and staff.

The couple had in fact been planning their wedding before David was diagnosed with kidney cancer earlier this year, but his illness meant they had to put their nuptials on hold.

Margaret said: “We had applied for a licence and were planning our wedding but then David became ill and has been an inpatient at the Royal Free Hospital since March.”

The couple met when Margaret was working as a cleaner at a Jewish youth club and David, who was in training to be a taxi driver, was doing part time work at the club polishing the floors.

Margaret, who had three children from her first marriage, said she waited this long to marry David because, “I wanted to be sure!”

David’s recovery has been slow. He was in intensive care at the hospital until August and now is receiving regular physiotherapy as he is still unable to walk unaided. Margaret has spent every afternoon at the hospital since March.

Margaret says: “David has been very ill including several bouts of pneumonia but he’s really turned the corner now and the next stage will be leaving the hospital and going into rehabilitation. All the staff looking after him here have been absolutely wonderful.”

David says the secret to his and Margaret’s long and happy relationship is that they don’t go to bed on an argument and that they still have the occasional night out without each other.

Hannah Metcalfe, ward sister, said: “We’ve loved helping David and Margaret plan their wedding here. We lent a hand with the paperwork involved to get a registrar, helped measure David for his suit and staff also enjoyed decorating the room and hearing about their plans.  They are a lovely couple and are devoted to each other. This is the happy ending they both deserve.”