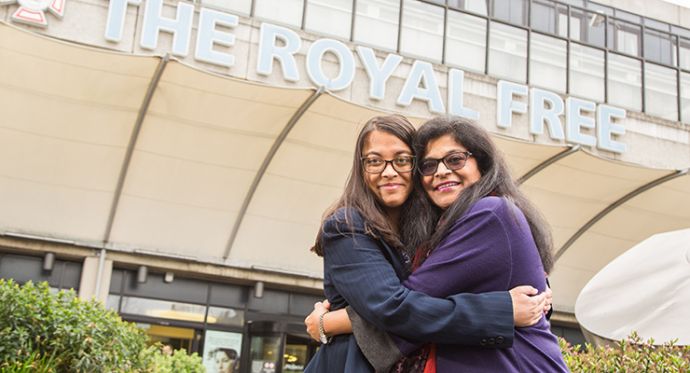 When Prafula Shah learnt that her niece needed a kidney donation she didn’t hesitate to offer to give her one of her own.

Unfortunately, Prafula’s kidney proved to be a poor tissue match for 24-year-old Shakti who had been on the transplant waiting list for the last three years. Shakti, a government policy advisor, has suffered from chronic kidney disease since she was a child and spent much of her time in and out of hospital.

Earlier this year her condition deteriorated dramatically and she was forced to spend several months on daily dialysis.

After talking through their options with experts at the Royal Free Hospital, Prafula and Shakti made the decision to join the National Living Donor Kidney Sharing Schemes (NLDKSS) as a ‘paired donation’, to try and increase Shakti’s chances of finding a match.

The scheme attempts to pair donors and recipients across the UK - kidneys are swapped between one incompatible donor and recipient and another mismatched pair.

A match was found and in March, Prafula and Shakti, had their procedures on the same day, just metres away from one another in theatres at the Royal Free Hospital.

Prafula’s four-hour operation was carried out by consultant vascular and transplant surgeon Colin Forman and, with her permission, filmed for BBC News to try to help improve donations amongst black and minority ethnic groups.

Colin Forman said:  “Nationally one in three patients waiting for a transplant are from a BME background but they make up only 6 per cent of donors.  Tissue type is like blood group, you are more likely to get a good match from the same ethnic background as yourself, but because of the lack of donors patients wait longer and then are likely to get a donor that is poorly matched.

“Anybody can come forward as a donor and it is possible to transplant across ethnic boundaries but it is often a less good match.”

Explaining the kidney donation process Colin said that once patients have been screened and tested the surgery takes between three and four hours followed by a three to five day stay in hospital and an average six week recovery time.

After going through a range of physical and psychological tests, and once she had discovered it is not necessary to be a blood relative to become a donor. Prafula was able to donate her kidney.

“Given that it is possible to lead a good and normal life on one kidney and knowing the difference it could make to Shakti’s life, I had no hesitation in donating. It’s one thing to donate when you are no longer on this earth but it is another to do so when you’re still alive and both have a really important part to play in donation,” she said.

New legislation is set to be introduced which would see a change in the law regarding organ donation.

Under the proposed new system, people will automatically be considered an organ donor unless they opt-out and indicate they do not wish to be.

Prafula said that, given the proposed new legislation, which she hopes will help the waiting lists for transplants, she would urge families to talk about the possibility of organ donation.

The Royal Free Hospital is one of the country’s leading transplant hospitals and both Prafula and Shakti praised the organisation and its staff.

“The staff are truly amazing. The procedure has gone smoothly and I could not have done it without the support and encouragement from the amazing staff, before, during and after my surgery” said Prafula.

Shakti agreed.  “The staff at the Royal Free Hospital are kind and dedicated people, and I have been very grateful to have been in their care at all stages of the process from preparing for the transplant to ensuring that the recovery has been as smooth as possible.

“I was not nervous before my operation, and it was helpful that I was able to meet many of the surgical team beforehand and knew that I would be in safe hands,” she said.

“It is now six weeks since the transplant, but I already feel that I have more energy than I have had in years and generally feel a lot healthier.

“My life now seems brighter with new opportunities and possibilities. In the immediate future I am looking forward to going back to a job in public policy that I very much enjoy and to enjoying the summer months with my aunt, family and friends - we have already planned holidays and trips.”

Prafula and Shakti are now helping to raise funds for a research project, led by Mr Reza Motallebzadeh, consultant renal transplant surgeon at the Royal Free Hospital, looking at the microbiota in kidney transplant rejection in order to find out ways to reduce the threat of a kidney being rejected by the recipient's immune system. For more information go here.