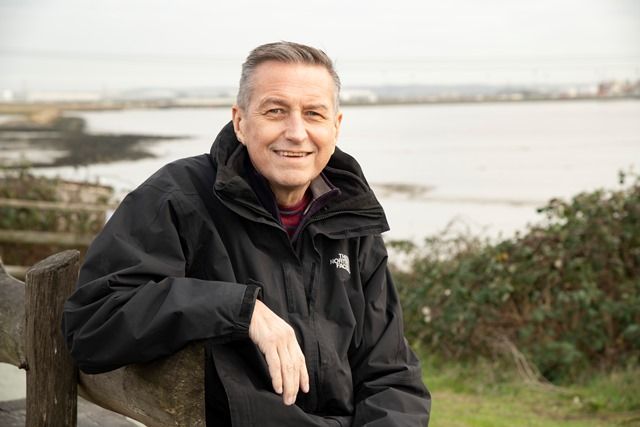 A patient who has become the 2,000th liver recipient at the Royal Free Hospital since transplantation began there more than 30 years ago says his donor’s family is never far from his thoughts.

David Edgell, from Canning Town, east London, says he is incredibly grateful to the family who granted permission for their loved one’s liver to be transplanted, granting him a second chance at life.

The 53-year-old, who before he became unwell was a senior project officer for a fire protection company, admitted that the grief he had felt at the death of his own family members in the past few years had caused him to start drinking more, which eventually resulted in his need for a transplant.

David said: “My father died and then a couple of weeks later my grandfather passed away. This was followed by my nan, who I was very close to and my mother, who died of cancer. That was it. I was on my own.”

Unwilling to sit in an empty flat at night David took himself to a local pub for dinner and three or four pints of lager.

“I didn’t really drink that much before that and held down a responsible job. I never missed work and I wouldn’t say I was ever really drunk and didn’t go to work with a hangover.”

But nevertheless the steady drinking took its toll.

One day David noticed his body was severely swelling. He went to his local hospital, Newham University Hospital, part of Barts Health NHS Trust, and was diagnosed with cirrhosis of the liver.

He said: “Getting that diagnosis panicked me. I’d been depressed but this really shocked me. I felt upset thinking that I’d let down my family and I’d brought this on myself. In actual fact I’d stopped drinking a couple of months before I even became ill but it was too late.”

As part of the comprehensive liver transplant assessment process David was seen by the team’s specialist alcohol nurses. These nurses work alongside patients both before and after the transplant to ensure that they do not relapse to alcohol use that would damage the donated liver. Patients whose livers have been damaged due to alcohol are only listed for a liver transplant if they have demonstrated to the team that they are committed to abstaining from drinking. David was listed for liver transplantation in the summer of 2018.

David finally got the call he’d been waiting for before Christmas and was told to come to the Royal Free Hospital in Hampstead as soon as possible.

He said: “I’d had my bag packed for the best part of a year. I told a couple of friends and that was it, I made my way there. I felt my loved ones were looking down on me and things would be okay.”

David’s transplant was successful and he is now back at home and coming back to the Royal Free for check-ups. Now his biggest aim is to get back to work, start practising his guitar again and go and visit his son who lives in Mexico.

David said: “I’m so grateful for the care and support I’ve received from the Royal Free Hospital but I know what it feels like to lose those you love and I am very aware of the family who will be missing their loved one. I do reflect on this and can only thank them for making the decision they did.”

Dr Yiannis Kallis, honorary consultant transplant hepatologist, said: “It’s a common misconception that the only people who end up in hospital with liver damage are the ones who have a bottle of Scotch on their bedside table or can’t get through the daytime without a drink, but actually that’s very much the minority. David is far more representative of the people we see. People who’ve developed a habitual unhealthy excessive drinking pattern and in the process irrevocably damage their liver.

“Work stress, bereavement, depression and anxiety are all common reasons why people develop a dependency on alcohol. I would urge people to count the units they are consuming, look at the government guidelines and, if necessary, cut back. Taking part in something like Dry January can really help people take stock of their drinking habits and if necessary develop healthier ones.”

Professor Joerg-Matthias Pollok, consultant liver transplant surgeon and clinical lead for liver transplantation, said “It’s a real landmark that we have reached our 2,000th transplant and I wish David well. I’d also like to pay tribute to our incredible multi-disciplinary team that collaborates to enable this life-saving work to take place. The liver team at the Royal Free Hospital are fully committed to establishing new technologies to maximise the amount of donated organs available for liver transplantation as well as exploring the possibilities of regenerative medicine and tissue engineering, to increase the donor organ pool.”

Doug Thorburn, consultant hepatologist and clinical director for liver transplantation, hepatology and hepato-pancreato-biliary medicine and surgery, said: ‘’None of this fantastic progress would be possible without the generosity of organ donors and their families but there are still insufficient donors for the number of patients awaiting a transplant in the UK. Over the last 10 years we’ve worked very hard to develop our liver transplant programme by creating a referral network which has seen a greater than doubling in the number of liver transplants we carry out at the Royal Free Hospital each year.”