A new treatment for a rare condition known as amyloidosis has shown promising results in its first trial involving patients.

Amyloidosis is a disease in which the body’s own proteins form abnormal, insoluble fibres that accumulate in the tissues of the body. These so-called amyloid deposits are not removed by the usually efficient processes for clearance of debris from the tissues. The build-up of amyloid deposits stops organs in the body working properly. 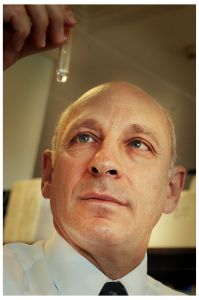 There are up to 8,000 patients in the UK who have amyloidosis, although many are not recognised. Until now, no drugs have been able to remove amyloid deposits from patients’ organs. Instead, current treatment involves controlling the underlying condition responsible for the amyloid deposits and treating the symptoms.

But a unique partnership between two drugs invented by Professor Sir Mark Pepys FRS, in the University College London Centre for Amyloidosis at the Royal Free Hospital, could change this. One drug is a simple chemical, called CPHPC, and is essential to allow safe and effective treatment with a second drug, which is an antibody, a large complex protein.

The treatment was developed in collaboration with GlaxoSmithKline (GSK) and the results in the first 15 patients who have received it have now been published in the New England Journal of Medicine. There was unprecedented, swift removal of amyloid deposits from the patients’ organs.

Sir Mark said: “Amyloidosis is a very challenging clinical condition. It causes serious ill health and is usually fatal, despite the best efforts to support the patients and to control the underlying conditions responsible for amyloid formation.

“Furthermore, amyloidosis can present in so many different ways that, coupled with its relative rarity, the diagnosis is often long delayed. As a result, patients frequently have advanced disease before they receive any treatment.

“We have long recognised that measures to remove amyloid from the tissues are required and have been working on this problem for more than 30 years. We were finally successful for the first time in experimental models 10 years ago. The collaboration with GSK started in 2009 and it has been a privilege to work with their expertise and resources to bring our approach into clinical testing. Seeing clearance of amyloid deposits from patients’ tissues has been thrilling. It is a crucial first step on the long path towards having a medicine that could transform the outlook for people suffering from this terrible disease.”

The present clinical trial is continuing and GSK and Sir Mark are now planning a second trial to further develop the treatment.

Sir Mark and his team have been working on amyloidosis since 1974. Their innovations in diagnosis and monitoring of the condition led to establishment of the UK NHS National Amyloidosis Centre at the Royal Free Hospital in 1999.

Some 4,000 patients visit the centre annually, including about 1,000 newly diagnosed patients, around half the total number of new cases in the UK.