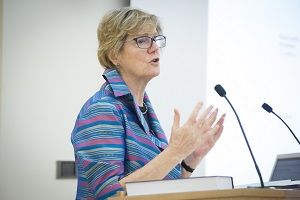 This year’s speaker was Professor Dame Sally Davies, Chief Medical Officer (CMO) and chair of the UK Clinical Research Collaboration. Dame Sally acts as the UK government’s principal medical adviser and the professional head of all directors of public health in local government.

Talking about her time as a trainee, Dame Sally said it was “a golden age of antibiotic development”. Today, we are at risk of returning to a pre-antibiotic era, making antibiotic resistant bacteria the pressing issue of the moment.

Dame Sally discussed the current prevalence of antimicrobial resistance, saying that the number of deaths is the equivalent to a Boeing 767 dropping out of the air each week. In south east Asia alone, one child dies every five minutes from a resistant infection. There are major concerns for a future with increasing antimicrobial resistance, for example our cancer treatments are underpinned by antibiotics and one in four babies are delivered by caesarean section, during which antibiotics play an important part.

The issue goes beyond how humans use antibiotics; there is a great need to reduce animal use globally too. Over 70% of antibiotics worldwide go in to animals and in many countries, antibiotics are tipped in to fish feed, which the fish are then not able to break down, meaning the antibiotics go straight out in to the environment. They are also used in agriculture through the spraying of crops. Dame Sally described the fact that it is cheaper to use antibiotics than to instil good hygiene practices as “very worrying”.

The CMO highlighted the need for new antimicrobials, vaccines and alternative treatments – no new class of antibiotic has been discovered for 26 years. There is also a need for good sanitation and clean water, increased understanding and better diagnostics.

The CMO went on to talk about work being done to improve the current situation and help us move towards a future without antimicrobial resistance.  The Fleming Fund, set up to fight drug-resistant infections worldwide by Government, will improve surveillance of drug resistant infections in the developing world and it is hoped that antimicrobial resistance will make it on to the UN General Assembly 2016 agenda.

Education and awareness is the key to the fight against antibiotic resistance and clinicians, patients and members of the public must choose to do more to ensure better understanding.

Dame Sally is a staunch supporter of ‘Antibiotic Guardian’, an awareness resource created to spread the word about antibiotic resistance and what we can do. To find out more and to choose a simple pledge about how you’ll make better use of antibiotics and help save these vital medicines from becoming obsolete, visit www.antibioticguardian.com