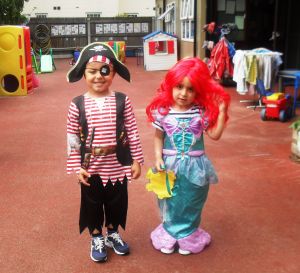 The ‘Big Toddle’ is an annual fundraising walk for children under 5 organised by Barnardo’s.

During the week children aged under five, along with staff from the nursery, dressed up as pirates and mermaids to complete the annual toddle. They walked half a mile around the garden and were awarded with stickers and a medal to celebrate their success.

The toddle also marked a fond farewell to some of the children, most of who have been at the nursery since they were six months old, who will be starting school in September.

Laura Hanna, deputy nursery manager at the Royal Free London, said: “The children always enjoy the ‘Big Toddle’ and dressing up in their costumes. Our wonderful parents always raise plenty of sponsorship from family and work colleagues, making sure the week is a resounding success.”